Let us know.
To provide feedback, request additional data or analysis, or ask questions about the site, contact us here.

The site is secure.
The https:// ensures that you are connecting to the official website and that any information you provide is encrypted and transmitted securely.

Protecting public safety and holding violent criminals accountable is our top priority and the priority of every single prosecutor in the Denver District Attorney’s Office.  We know from the 2022 midterm election results that violent crime was a topic most registered voters saw as a very important issue (Pew Research Center report, Violent crime is a key midterm voting issue, but what does the data say?).


There are several reasons for this. One important one is that the Denver Police Department’s data reflects reports of crime but not crimes that are solved. My office cannot file a case unless we know who to charge and have evidence to prove that person’s guilt. For example, a car is stolen from someone’s driveway. The car may be discovered a few days later somewhere else in the metro area and the owner may get their car returned.  However, if we cannot prove who stole the car, we cannot file a case. Simply put, our data is based on cases we can prove in court, not reports that a crime occurred. 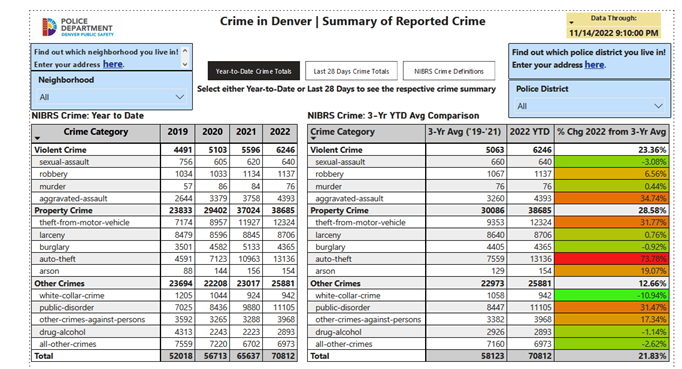 The vast majority of the violent crime cases we prosecute are the result of the hard work of the Denver Police Department which has been hit like so many police departments nationwide with staffing shortages. Another theory that may explain the data is that that as the Denver Police Department hires more officers (their ranks are again growing) we will see a correlating increase in violent crime cases presented to us for filing. Time will tell if this theory is correct.

As to why reports of crime are increasing, those who study crime have various theories as to why crime rates are escalating nationwide: the effects of the pandemic including closing social gathering places, economic decline, anger, the impacts of social media, woeful lack of adequate resources for mental health and substance misuse treatment. The unfortunate truth is that crime is up just about everywhere in this country – including here in Denver. And with the midterm elections now behind us, it is worth repeating that there is zero evidence that progressive policies are what’s driving the nation’s crime increase, zero.

The data on violent crime case filings is a good example of why we need to review and monitor our data through our data dashboard. We can now keep a close eye, as can the public, on the number and kinds of cases we are filing and the dispositions of cases.  Let us know what you think by writing to us at info@denverda.org.